The journey home could have been a nightmare, but ended up ok. We had to get up really early and missed breakfast, which was sad as I was looking forward to my customary croissant and cheese. We caught a taxi to the airport and watched the sunrise over Hong Kong. 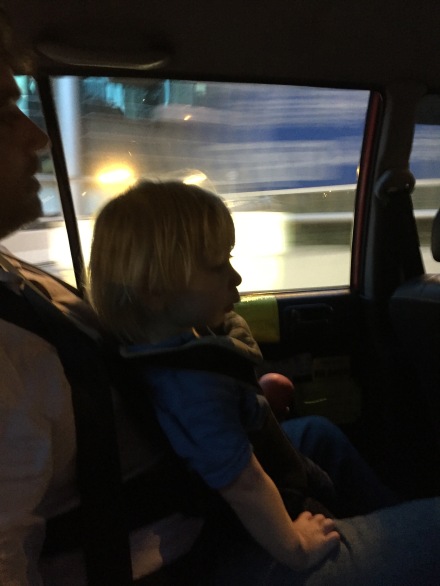 The first flight was busy being a commuter flight to Beijing but we were seated in the bulkhead row so had enough space.

Once at Beijing we had a small issue in that  my pushchair failed to arrive. We waited for AGES. It was ironic as we didn’t use it the entire trip. Eventually we gave up as we had our connection to make. There was a slight misunderstanding between us and the official airport lady at the gate who thought we were on an earlier flight than we were so we managed to be fast tracked through the airport on false pretenses bypassing massive queues… Ssshhh don’t tell anyone! I then spent a happy hour at the play area (the same one as the week before) before boarding our next plane.

The big M was not amused as they did not give us the bulkhead seats nor did they give me my own seat so the three of us were hemmed into two seats next to other people (poor them!). However, after a lot of huffing and puffing and sweet talking to the man next to her she managed to procure us our own row. This was perfect as unlike on the bulkhead aisle we were able to lift the arm rests and I could stretch out and sleep, which is exactly what I did for a few hours.

After 11 hours we arrived at Heathrow and again the pushchair was conspicuously missing at the gate. A very unhelpful woman was exceedingly unhelpful about what to do but a nice man (coincidentally the guy that checked us in the week before) helped and we eventually tracked the pushchair to the hold. So all was fine.

We then jumped in the car (which was luckily still where we left it) zoomed home and I was back in my own bed fast asleep by 9pm. Travelling. Simples!

So far so good. We’re on the first leg of our trip to Hong Kong. We checked in to first class (although sadly hadn’t been upgraded) but did discover we’ve got the bassinet seat which fingers crossed will make the flight to Beijing a bit more comfy for all of us.

Then we went through security. Here I am … I didn’t set off the buzzer.

Next stop wheeling my suitcase to the play area

And finally a bit of playtime.

The big M and D said something about wearing me out. Don’t know why. I feel wide awake!

I’ll try and update you in Beijing wifi dependent.